Spacin in the Basin,  North Cascades Backcountry Skiing May 2014: the movie  (14 min)

Dropping into a steep chute we found off Blue Peak, down into Blue Lake…just classic. 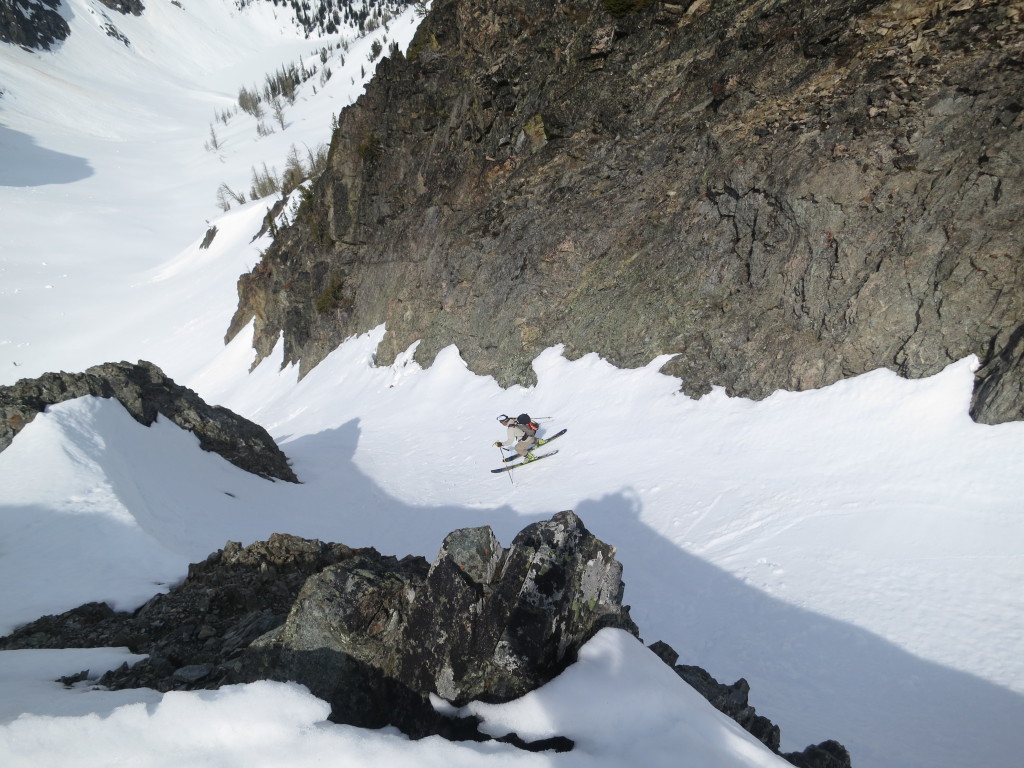 I’m goin to the mountain, going to the sky
Gonna ride the chutes on the skis and fly
Ramblin down the road feeling free
Looking  to find another new place to ski.

Timing was good…WA Route 20 that goes deep into the heart of the North Cascades was scheduled to be cleared of snow and open the day before my arrival.  Ski buddies Chris Park and Lizbeth Zimmerman from Sandpoint Idaho planned to meet me up there in their custom deluxe campervan “Van Diesel”.   The mountains up there are dramatic and  steep.  Budget rented me a really nice Chrysler Town and Country van in which all the seats fold down into the floor flat making a perfect campervan, and they were renting at a super cheap price of $275 for ten days…good deal.  I packed camp gear, stopped for food and drink and headed up to the mountain, headed to the sky, feeling free, looking for a place to ski.

The sun shone clear and there was not  a whisper of wind Saturday afternoon. Daylight lasted until 9 pm; sixteen hours of daylight. Headed up a cool looking chute between two large cliffs under a huge bowl below Liberty Bell and the Early Winter Spires above the hairpin turn.  The snow was late day mank and soft, but I got a nice short run in.  I parked up by Blue Lake and the next morning dawned cold and clear, with perfect hard snow for a great corn set up.  I hiked up with crampons to the high bowl below the cliffs, avoiding the the avalanche debris lines falling from the cliff which warm later in the day and got a perfect, perfect, smooth corn run in.  Happy camper. The next morning was warm and clear again so I went to the top of the hairpin couloir and bowl and got some classic big mountain corn under perfect conditions on top.  That night I headed up for an overnight camp at a high mountain lake cirque Cutthroat lake.  I got kind of lost on the way up for an hour and didn’t arrive til 9pm, but it was still light.  It was a beautiful lake and not a soul around.  The next morning the snow was all isothermic so I headed back down the hill and met up with Chris and Liz.  We hung out for a while then headed back up to Blue Lake where we had the whole place to ourselves and a perfect “berth” for their camper van against the snow banks so they could step right out of the high camper door on to the snow.  The next day we headed up to the upper bowl and found the “Sogi Couloir” which connected to a classic chute and bowl leading to a pretty lake and a nice tree ski back down to the car.  Funny but none of the old timers or locals seems to know about this fairly obvious and truly classic loop tour because it was not in the “tour book”.  Pretty funny.

After the tour and a nap, we all hung out and played music, drank beer and talked to the locals passing by who all stopped in.  Perfect sunny set up.  Turns out Chris and Lizbeth are in a band also in Sandpoint Idaho and played some really great original tunes which are in the movie soundtrack.  Chris had a little Martin travel guitar which really sounded good and played pretty well for a small travel guitar.  Next day was more of the same, perfect sunny weather, nice corn snow.  Their van had a woodstove which was really nice to sit and drink coffee on a chilly morning, and a nice table to eat dinner at.  Lizbeth made delicious salads with fresh grown produce. Friday they headed back east and I sure missed them when they left.  They sure were nice and  a lot of fun.

The Dynafit Cho Oyus worked well for the spring corn conditions.  They are super light so they move fast and easy.  The narrow waist is no probem and the sturdy tail is good for  punching into the snow so the ski stays in place at transitions.  They didn’t work so well in the deep mushy soft warm snow.  I’m also wondering if mounting the bindings a bit more forward would make them a little easier to turn.

After they left I headed to Rainy Pass and found some really classic chutes the went from the top of the mountain all the way to the road. The snow was firmer as it had cooled off a bit and the sun was less intense with some clouds. The chutes were steep, wide, and straight fall line.  Definitely the best line of the trip.  Plus, I was the only one there, even on the weekend which contrasted with a crowd…(maybe 8-10 people) up at Blue Lake.  Some bad weather finally blew in so that afternoon I headed down to Anacortes.  Pretty town and stealth camped in the marina lot, got some laundry done. There was a nice bathroom and showers.  The Town and Country was totally stealth.

Huge 30 foot mobile homes struggled and strained to make it over the high mountain passes sucking gas and air.   1 in 10 stops and huge overweight people pop out to goggle at the beautiful mountain scenery for a few seconds then jump back inand roar off. All I can think of is the words toBob Dylan’s song, Desolation Row,:…and the the heart attack machine is strapped accross their shoulders and then the kerosene…”

Heading down thru Seattle, the annual REI sale was in full swing and mobbed with 30 people in every checkout line.  I touched some gear but couldn’t stand the crowd.  Stopped in Bellevue on the way, east of Seattle.  Its a really beautiful new city filled with young Microsoftee’s and reminded be of Beverly Hills.  Lots of nice restaurants. Very classy place that I did not know existed.  Seattle is a really beautiful city, big, new, clean, with beautiful views of Puget Sound and the Cascade Mountains to the East.  I’m very impressed. Probably the nicest city on the West Coast and passes San Francisco by.

Finally back home to Hawaii.