Sarah and I took the direct flight from Kona to Anchorage leaving at 9:30 am and arriving at 4 pm. Just a perfect schedule. We went out to a nice dinner with Stu and his girlfriend Kelly at an trendy Anchorage restaurant. The women were  attractive, slim  and hair styled. That’s a first.

Stu Brown, Matt, Sarah and I planned to fly in to the Talkeetna Range to ski and glacier camp in March 2016, but when we arrived at Talkeetna airport, Paul Roderick, the famous owner and pilot of Talkeetna Air Taxi said the snow was no good but he had a nice place in the Alaska Range they had been skiing. You ALWAYS listen to pilot Paul. So we changed plans. Leighan Falley, our pilot,  outstanding skiier, avalanche safety expert, and an extremely attractive and pleasant young woman, expertly flew us in in the Beaver ski plane out of Talkeetna into the wild Alaska Range on a beautiful sunny calm day. I had the best trip of my life, and the best skiing I’ve ever done. Thanks Paul and Leighan for the suggestions, flying and support!  Talkeenta Air Taxi is the best!

Here is the movie:

We set up the usual pimped out “glamping” set up with the 17 foot Hilleburg Atlas with liner and vestibule with 4 burners, a large 4×4 checkered covered center island dining table and full bench seating all around. We had our separate Hilleburg Namatj 3 GT tent. We had a full kerosene heater and a Mr Buddy propane heater to warm up the sleep tent in the AM. We had a separate BD Megalite for the WC. Deluxe.

The temperature was about 10F, calm, with light fluffy powder that smoked. We had an entire drainage to ourselves, and were the only people in the entire Alaska Range that week. After a few days of calm sunny pow, it snowed about a foot of blower fluff. We even skiied at midnight in the moonlight. Another pilot and Leighan came in with some girls from Talkeetna for a ski, and again a few days later to camp, and they stopped by one evening to hang out at our Bar and Grille. The last day of skiing was one of the best days of my entire life. Stu and Matt had to leave, and the crew at TAT told us a big storm was coming in, so we packed up and took off a few days early. It was a big storm that dumped a foot in Anchorage.

As far as I know, I invented the separate tent for the WC, and have the most glamorous camp set up in Alaska! 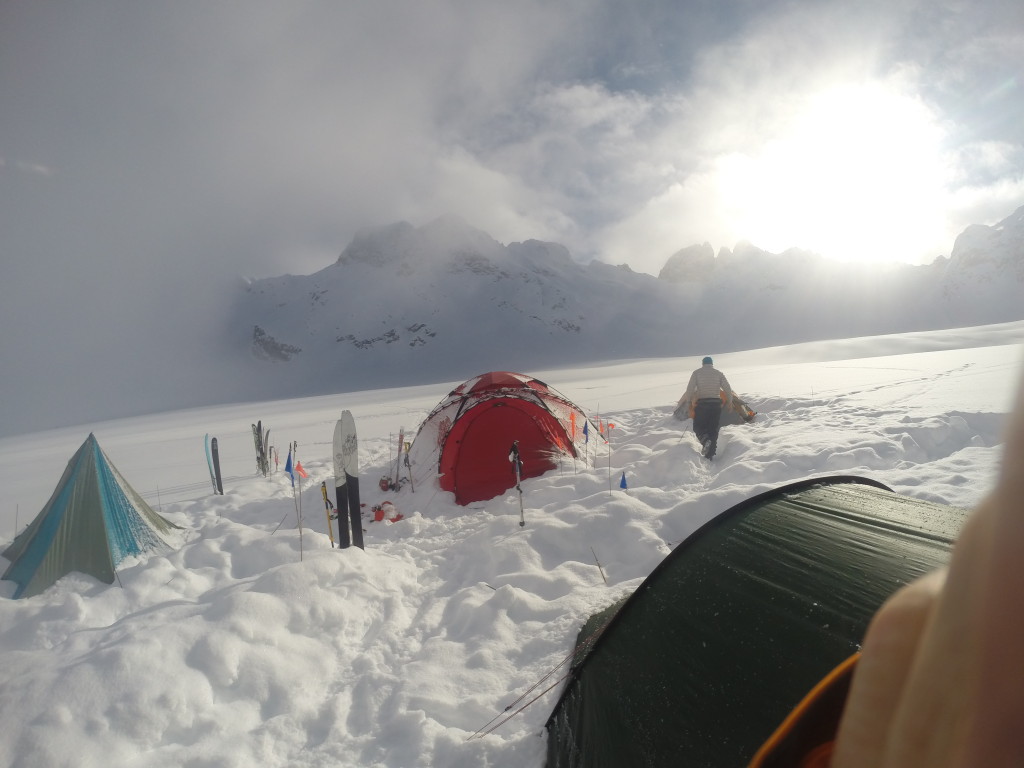