We skied for 24 days in British Columbia, Canada,  January-February 2017 and hit the weather just right:  cold temperatures through three snow cycles with steady snow.  The result was cold, dry, deep powder.  We traveled the “Powder Highway” through the Goat, Kootenay, and Selkirk ranges and the Canadian Rockies.

After flying into Spokane, Washington, we headed to Sandpoint Idaho and met up with our friends MoonVapour and Dream Catcher and stayed at their cool backcountry off grid place on Mt. Baldy.  They used  a snow machine to tow up the roads to access the bottom of the runs.  We skinned up under sunny blue skies in -15 C weather to find cold, dry powder in open fields, and on the north side, a  shaded glade we dubbed, “Dark Side of the Moon”.  You had to keep moving, but it was cold and deep back there.  Upon returning to their home, we had a wonderful meal of hot soup, and a soak in their  wood fired hot tub next to a creek under a starry sky.  It felt so good!  We jammed and played music.  Chris and Liz have been perfecting their ukulele duets and vocals and I really enjoyed playing with them. 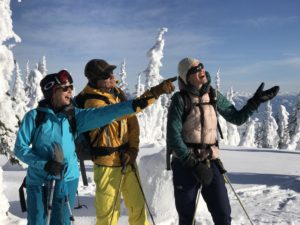 BC is a great place. Canada is the most uncrowded country in the world with only 4 persons per square kilometer.  The roads were empty and it was easy to find places to stay through Airbnb.  The Canadian dollar was at $.75 so everything was a great deal.  The Canadians are mellow and friendly.  People say “hi”  just walking down the street! When you walk into a restaurant, other diners greet you and  say, “Good Morning”!

We headed up to Nelson next and skied at Ymir Lodge ymirbackcountrylodge.com above Nelson.  You heli in about 10 minutes and get out at treeline and really nice terrain.  We met some folks from Anchorage Alaska that we had met several years before out on the Denali Glaciers and had a nice connection.  Brian, the hut caretaker, is a voluble, friendly hardworking Canadian from Jasper and we struck up a friendship with him  Trevor, who owns the lodge, recalled some of our adventures getting to Ymir Yurts years ago when the snowcat fell off the road and we had to dig it out.  There had been a big snow event and the avalanche danger was high, so everyone dialed it back.  The next day was cold and clear, and the snow settled nicely and great snow was everywhere. 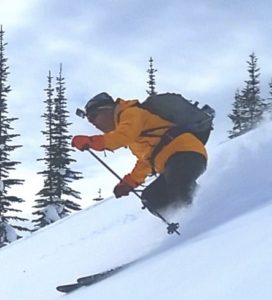 The next morning, the  Alaskans were due to fly out and wanted to get a last morning run, but the temperature had gone up and the avy situation had gone bad.  Unfortunately three of them got caught in a big avalanche and one girl was killed.  It was a traumatic and emotional hit for everyone involved and for all at the lodge. We felt so bad for her parents. We helped with the rescue and it had a huge impact on us.

Then we headed to Nakusp and skied with Rod, friends of Moon Vapour and Dream Catcher.  He lives in the woods and takes skiers out on snow machines and tours in the Goat Range.  Its a long day riding, climbing and skiing.  Rod is 65 years old and can climb 2000 meters a day, has a thirty year old girl friend and  is very strong.  After two days of that we were beat and retreated to Nelson for a couple rest days.  Then back to Ymir Lodge for a few more days of nice sunny pow.

After that we headed up to Rogers Pass which is awesome,  intimidating, and really really steep.  Big lines, as big as it gets.  We edged our way slowly into the lines and scored some epic powder days.  One day right after a big cold storm we skied waist deep blower powder.  One of the best days ever.  We stayed in a little tiny ski cabin near Blaeberry. We also stayed with our friends Andreas and Suzanne who have a beautiful new modern ski cabin with the latest European technology and design nestled next to huge dramatic mountains. 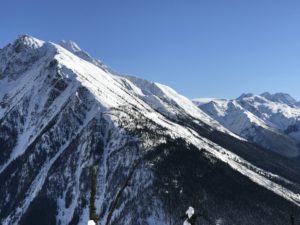 We stayed till the weather turned warm and headed down to our daughter’s baby shower in Berkeley California and met up with our son, and his new wife.  Some old friends were there and the nice weekend wrapped up one of our best trips ever.  Now we’re prepping to head back to Alaska and camp on the glaciers.