A friend emailed from Japan, “Japan is happening get over here now!”  So we did… and scored.   Here’s a pic of me skiing waist deep powder blowing over my head!  Its the best deepest lightest most uncrowded powder I’ve ever skiied in my entire life. 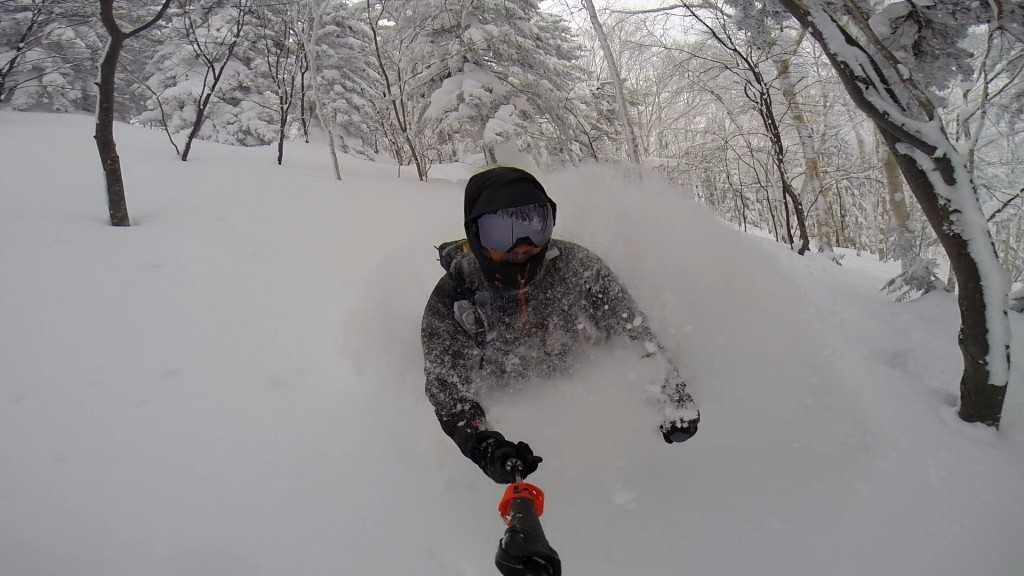 The airfare and flight times were cheaper and shorter to Japan from Hawaii than BC, so the trip switched to Japan.  We had originally planned to go to British Columbia, but first they had no snow, then a dump and a  bad avy situation with huge slides triggering. It took a lot of research and planning to do the Japan trip, and the Japanese info on the web is sparse and the translations difficult to decipher.  The info is included below as a reference and resource.  Japan offers incredible skiing and a cultural experience.  For me in Hawaii Japan is close, plus my son speaks fluent Japanese and he had signed on to the trip.  As it turned out, many more Japanese speak enough English to do tourist transactions, and I know enough Japanese to say Good morning, Good day, Thank you, and Please help, where is the bathroom, and May I have another beer please.  The recent 30% devaluation of the yen made hotels, food, sking incredibly cheap, and even cheaper than the 30% currency discount might imply. French wines were $9-12, Spaghetti dinner $9, glass of wine $2, beers $3, lift tx $40, single ride $10, full room and board at Onsen hotel close to the base of the Tram was $60 per person per day.  Add to cheap prices is the fact that you DO NOT TIP in Japan, not the waiters, not the taxi, not the bellhop.   I tried to leave some change at a restaurant and they come running out after me to give me my change.  Save an additional 20%.

The ski areas have an open backcountry and uphill policy and the Japanese do not ski off piste.  There were be nice lines of untracked pow right next to the piste.  You would never see that in the US.  The ski areas had only a few dozen people skiing on a given day.  Its an amazing set up.  The Japanese are super nice, polite, and helpful and work really hard.  Very little “attitude”, lots of smiles and laughs.  There are and handful of Aussies up there skiing so the Japanese are used to loud English speakers..

The onsens, the hotbaths fed by natural volcanic hot spring water, are wonderful and a big allure of skiing in Japan.  They feel so relaxing both in the morning and after a big ski.  You wash before going in by sitting on a stool with a hand held shower.  The minerals in the water soak into the skin and tired muscles. Put the little towel on top of your head and do not let it touch the hot water.

The toilets have hot seats and electric programmable bidet and rear end washing jets which jet hot water for cleaning and take a little getting used to.

Japan just had the biggest snow storm in over 100 years due to cold Siberian wind whipping over the Japan sea and turning into light dry powder as it hit Hokkaido, the northern Island in the Japanese chain.  The base was already 3 meters and when we arrived there was 20 cm new on the gorund and it snowed hard day and night with only a few hours break for 10 days straight.  Powder was  waist deep blower.  I had to dig out my car every morning. Here’s a video of some pow.  Truly the best powder skiing of my entire life.

A few weeks before you leave for Japan, get an international driver’s license from the National Auto Club for $15 in order to rent a car.  You have  to have 4×4 or AWD as all the roads in Hokkaido, even major thruways are covered in snow due to constant snow.  Drive left! Look right!!  Times Car Rental, Nissan Car Rental, Toyota Car rental all have convenient locations with cars with GPS “car navigation”  that speak English. Unfortunately they are written in Kanji so I had to ask people to put in the phone number. You program the phone number of the place you are going to get driving directions. Car rental is expensive. I haven’t figured out who has ski racks.  Get a big car if you can.

Fly to Narita, then to Hokkaido, via either New Chotose near Sapporo, or if you can fly direct to Asahikawa via Haneda.  Rent a car there.  You can take a train from Chitose Airport downstairs from the airport and go directly and easily to Asahikawa.  Buses with skis and gear would be a hassle. One person could do it, but not two or more due to the space and lack of racks for skis in the trains and buses. Don’t forget the international date line change when making reservations! Its very confusing.

Super Kamui Rapid trains from Sapporo’s New Chitose Airport continue to Asahikawa, no transfer necessary in Sapporo;2 hours.  ¥4480.   Track 2  Get U seat w/luggage space departs from New Chitose airport at every  xx:19.  Make an reservation at the reservation office that is called “Midori no Madoguchi (みどりの窓口) – 13:19 arrives 15.29,   If you don’t get a reserved seat you may have to stand between cars. They announce the stations in English on the loudspeaker so its easy.

You can rent a  JCR Phone chip in advance and pick it up at  Narita Airport Terminal 1,  Departures Level 4 rent a  chip  GPA COUNTERS (Green Port Agency)  by Yamato Transpor level 4.  Look for the Yamato logo.  This allows you to get mobile data, but its not cheap and there was limited connectivity in Daisetzusan National Park.

Bus
Asahikawa City to Kurodake/Sounkyo Take Route 39 for Kamikawa / Sounkyo 66km - 60min
Asahikawa City to Asahidake From Asahikawa, take 1 jyo (Route1160, Asahikawa-Taisetsuzan-Sounkyo-sen) to the East. After you pass Chubetsu-Dam, take the right to Tenninkyo, then take the left for Asahidake. 43km  – 1hour

Times car rental reservation@rental.timescar.jp  11-785, Miyashita Dori, Asahikawa-shi IDP not very good selection.  Toyota Rent a Car has the RAV which would be perfect.
Kurodake: Hotel Taisetsu(ホテル 大雪)  Tel:0120-123-717      book thru Booking.com $80/pppd full board  There is a cable car. $18 round trip.
Asahidake:  Hostel Daisetsu-zan Shirakabaso YH  Asahidake-onsen, Higashikawa-cho, Kamikawa-gun, 071-1472 Hokkaido Japan Tel. 81 166 97 2246  email confirmation $60 pppd full board. There is a cable car here, $11 single ride.  The “youth” hostel has mostly old people in it, lol, but the folks are friendly. There is a ski waxing table and iron and drying room downstairs.  Its a great set up here.
Todachidake:  http://www.ryounkaku.com/   shirakabaso@ai.wakwak.com     Tokachidake Onsen  ami-Furano, 071-0579 Japan Phone +81167394111 Fax     +81167394112 Email onsen@ryounkaku.com  booking.com $75pppd full board. Great food!  Very remote. No lifts, complex terrain.  Get a guide! The food is outstanding here. The onsens have a wonderful mineral content and appear muddy, but its wonderful for your skin.  The outside tub is super hot and the cold snow keeps the beer cold.

Here’s an interesting picture of my father Francis Sogi in Hokkaido Japan in 1947 shortly after the end of World War II during the Occupation of Japan.  My father served as a Counter Intelligence Agent for the US Army to prevent the Russians from taking over Hokkaido. He told me the story of skiing for the first time there by walking up the hill with skins on his skis for 4 hours and skiing down.  That’s how he started skiing, and later in life got me into skiing.  He’s about the same age as Kenny is here.