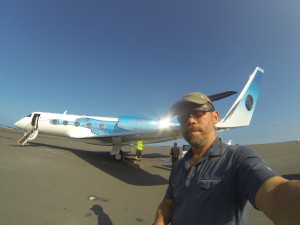 Mr. Shuksan is a striking mountain with classic ski mountaineering lines and extreme relief all around. Its big and extreme. 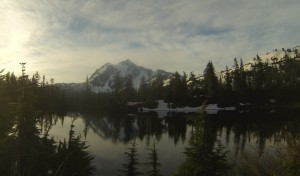 I couldn’t access the classic line on the main face due to heavy brush and the snow melted out low. Also, I was by myself, so couldn’t really go up on the glaciers with the crevasse danger.  So Ptarmigan Ridge in the col between Shuksan and Baker where there was still 20 feet of snow presented a good option.  The snow had suncups and looked like lemon meringue pie making the skiing a bit bumpy.  The weather was typically wet, but the sun peeked out a few times.  The high tech waterproof lightweight breathable gear was like being a duck in the drizzle.

I found a great bowl with lots of choices to ski. Here’s one of the nice steep lines, and yes its steep, then rolls over and gets steeper!  Kind of spooky dropping in hoping it didn’t cliff out on the line.

It was steep and bumpy so I took pretty easy. Falling was not an option if I wanted to walk out of there. It was about 1200 feet straight down. 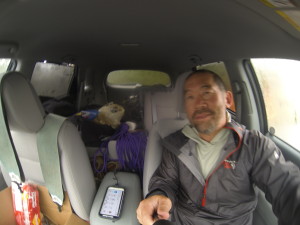 Its was a fast drop and a long way down from a cool jet to being homeless living in the back of my car, but hey…its an adventure!  As Kinky Freedman says, “Its a short trip from the limo to the gutter!”

Next skiing will be Antarctica in November unless I can get to Chile in August.